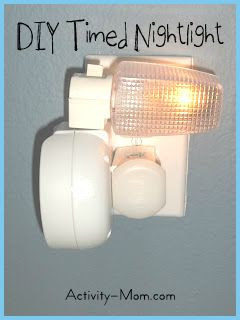 B was waking up often throughout the night and at 5:30 am for the day. I fell in love with this Good Nite Lite when I read about it in Parents Magazine. At the time it was on backorder. I was desperate for anything that was similar (B was 2 and had just moved to a big bed)! My hubby suggested we buy a timer from Lowes and connect it to the nightlight we were already using. We did it and it is AWESOME! I know it looks a little crazy, but it works for us and we saved some money.

Here is how it works for us:

For the first week, B would wake up really early and I would go in there and say “Your nightlight is still on, that means it’s still time for more sleep” and I would tuck him back in. There was a little crying but he would go back to sleep.
I have occasionally heard him wake up in the middle of the night and say “Oh no, still more sleeping.” It has been months since we started using it and EVERY morning he wakes up and shouts “Mom, Dad, my nightlight is off. That means it’s time to get up!”.

Advantages:
*You can blame the nightlight – When B is putting up a fight about bedtime I say “Sometimes I’m not ready for bed either but LOOK the nightlight is on and you know what that means…time for bed.”
*Sometimes he wakes up before the nightlight goes off, BUT he doesn’t try to get up or call for us.

You can get your own Digital Outlet Timer for your nightlight at Amazon.

When my daughter has always been an early riser. As a baby she'd be up at 5:30am everyday. When she was a toddler that time frame started getting earlier. Finally when it hit 4:45am it was too much for me. We did this same concept. IT WORKED PERFECTLY for us too!

My daughter is six now and we still use our "wake up light." If she wakes up before it goes off at 6am she knows to read books or play in bed until it is the right time. Love it.

Oh, this is good stuff! Thanks for sharing the link!

What a great idea! I'll have to remember this in case I ever need it.

BRILLIANT - I will be doing this for our little fella!

awesome idea - we need something to keep our little guy in his own bed...maybe this would do the trick!