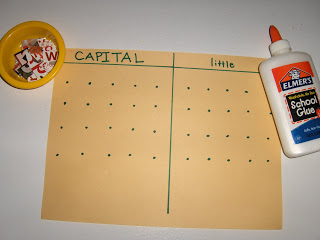 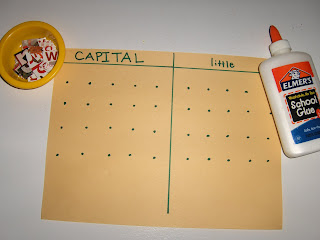 A graphic organizer is a great learning tool and classifying/sorting is an effective way to reinforce any concept. B feels confident with his lowercase letters now so I thought I’d give this sort a try. I saw this idea on The Shafer Family Blog. I divided the paper in half, one side for capital letters and the other side for lowercase letters. I cut out different letters from newspaper ads. 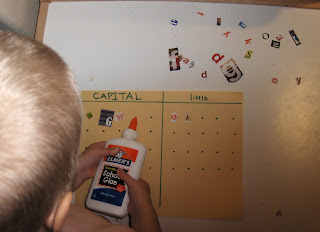 I put the dots on the paper so B would know where to put the glue and the letters. Otherwise they would just end up in one big pile in the middle. I had B tell me if it was a “Big Capital letter” or a “little letter” and then I’d tell him which side to put it on. After awhile he could figure out what side the letters should go on by himself.

Another great thing about this activity is the different style of fonts that were cut out. This activity was a hit! Later in the day I got out upper and lowercase letter stickers to put on the chart but he wasn’t as interested. I’m not sure if he was tired of the activity or if glue was the real hero here.

Drawing Through the Alphabet Letter E

Check Out My Book!