Skip to Content
Playing with Your 23 Month Old
I can’t believe that our little G is almost TWO!  He’s growing and learning so quickly; here’s what we’ve been up to lately!

Lately, G has been trying to sing the ABC song (which consists mostly of him humming!) so I thought he might like these.  I know you can buy them, but I braved making my own, using sandpaper from the dollar store.  I won’t lie.  These were a PAIN to make (tracing the letter, cutting it out, gluing it on cardstock)… But G likes to feel them and it’s good exposure to the printed letter.

He loves his rainbow rice with tiny Easter-themed objects!

I grabbed a cookie sheet at the dollar store and wrote the letters out, using puffy paint.  He loves to feel the “bumpy” letters!  This will be an activity that will definitely grow with us! 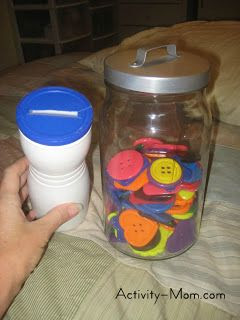 He loves to drop my big buttons through the slit in the Puffs lid!

We rolled out some Model Magic, cut it with cookie cutters, and then G got to push glass garden pebbles (from the Dollar Tree) into each shape!  He LOVED doing this!  Granted, once they dried, he systematically removed EACH AND EVERY pebble but oh well.  He enjoyed the process. 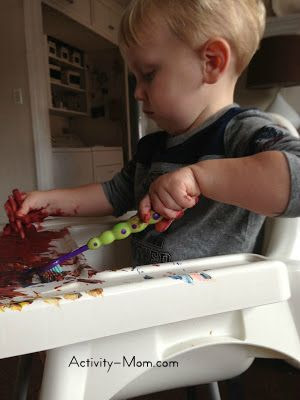 The boy requests to paint every single day!  I contain him in his highchair and always tape his paper down so that it doesn’t go flying off.

These foam blocks came from Costco and he LOVES them.  He loves to dump them, stack them, toss them, and just generally make a huge mess with them!

Our NEW Learn and Play with Your Toddler eBook!

Love the puffy paint idea on the tray! Awesome!