Skip to Content
I’d consider myself pretty thrifty. I love a good deal! However, every now and then there comes a time when thrifty becomes embarrassing. It happened to me (evidence of the event pictured above).
The kids wanted outfits for their Build-a-Bear Smurfs and I told them to save their money. Note: At this point I was thinking of the Build-a-Bear outfits we already have that have been used only once and were thrown in a closet somewhere. We told them that it might be a good idea and cost less to buy a newborn outfit from the second hand store instead. They didn’t want anything to do with that idea. 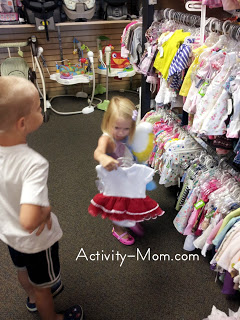 After a week of saving and still not having the $14 for a Build-a-Bear outfit, they decided they wanted to go to the store for a baby outfit. Great idea!

Now let me just say that the embarrassing part is not the second hand store! I shop there all of the time.
The embarrassing part was walking in there with those huge Smurfs and spending 30 minutes plopped down on the floor in front of the newborn section trying all of the outfits on the Smurfs! I put my foot down when N wanted to take her Smurf into the dressing room to try the outfits on it.
You would not believe the looks that we got from other shoppers and even the store workers. Ha! 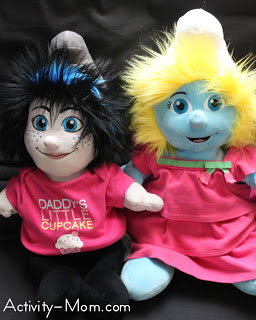 So that’s the day that thrifty became embarrassing for me.
However, look at how cute their Smurfs turned out (for only $2 each)!
And hearing their giggles about the different outfits and the fun we had together made it totally worth it.
Click here to cancel reply.

We put old clothes on dolls all the time! I'm sure people just thought it was cute/funny!

This is hilarious, and I love it! Great idea for picking out new doll clothes!

Ha! Thanks! I hope other people try it too...but don't feel as embarrassed as I did. =)

Mommy of Many Hats

What a great story and honestly a great idea. If only I hadn't just sold and donated all my newborn clothes Lol.

I know! =) I wish I would have kept a few of my favorite onesies or outfits for this purpose.

Hahaha...I bet everyone who saw them thought they were cute. How could anything think otherwise.