Escape Room games are a very popular thing right now. Depending on your kids ages, it can be hard to find one that is a good fit. So, I decided to make an at home escape room for my own kids to try and it was so much fun. It is a great way to get the kids to take a break from video games and is perfect for a family game night!

Here’s how to make your own escape room challenge for kids:

First, buy a lock that needs a set of numbers to unlock it and it can be reset to a new combination over and over again. Another idea would be to use a lock with a key and have one of your clues give a hint about where the key is hidden. Bike locks are another option. 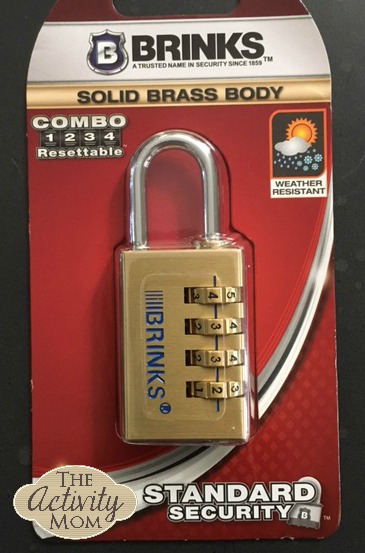 Then, I made and printed different clues and decided to use puzzles for the kids to solve. I decided to get tricky by making some of the answers single digits (to apply to the lock) and some double digit answers hoping they would weed those out and realize they weren’t needed.  I also printed harder puzzles for B (11 years old) to keep him involved.

In our own DIY Escape Room, we decided to lock up dessert (ice cream and girl scout cookies). This seemed more applicable to our kids than trying to escape from a room. 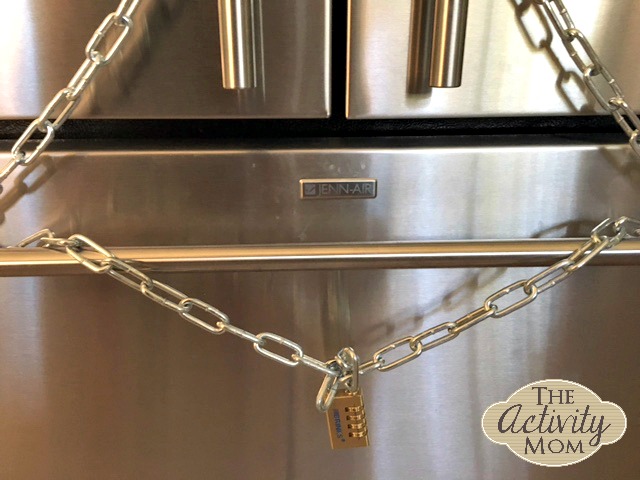 I hid all of the clues in the same room (the dining room) so they were “locked” in that room to figure it all out. That seemed to be the best way to start. These are easy options and it is ok to use easier puzzles for younger kids and a more challenging series of puzzles for older kids. That way each child will have the chance to take the lead on solving one of the clues.

Here are the escape room puzzle ideas we used: 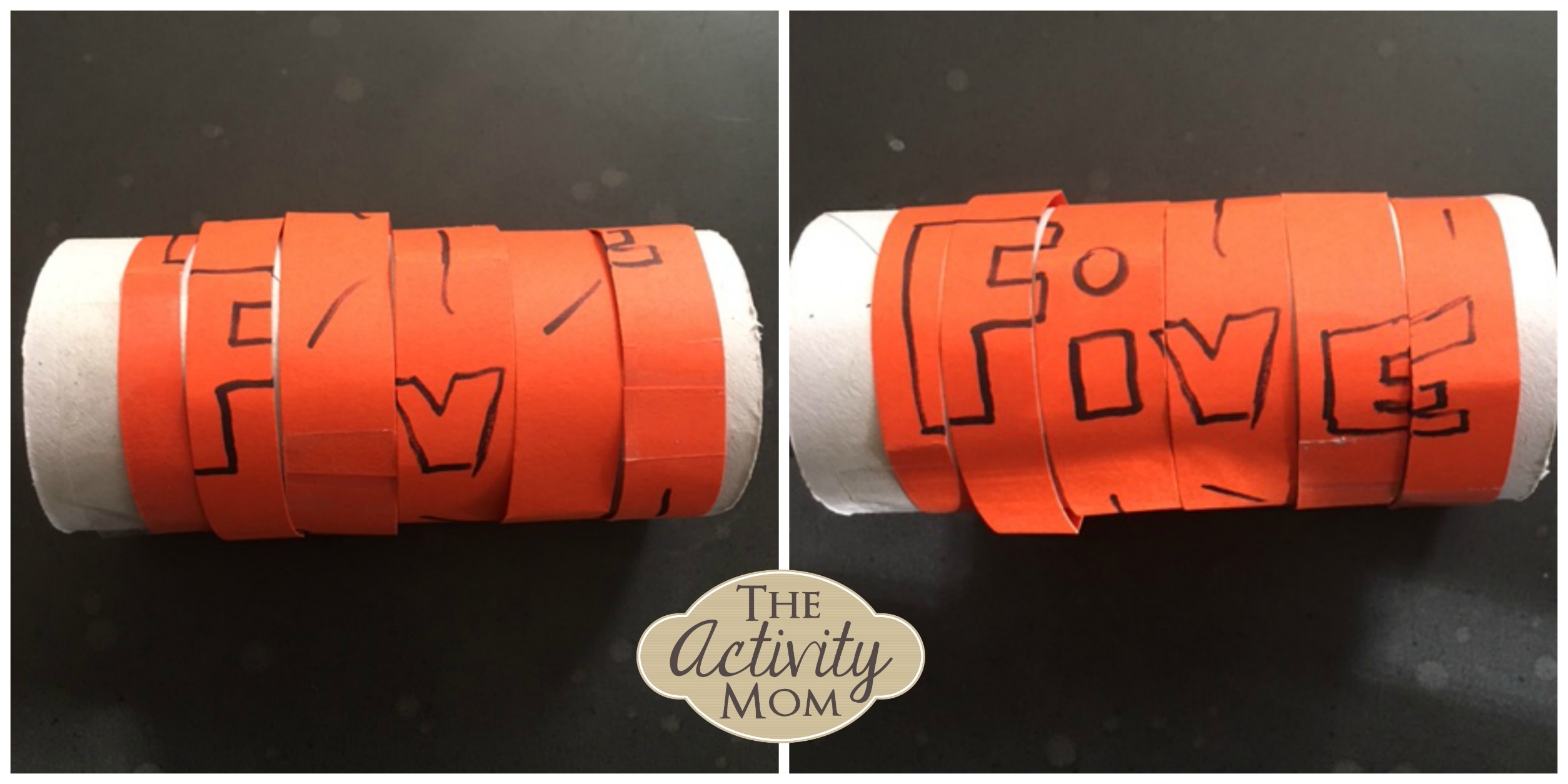 The first clue I made (easy to solve) is using half of an empty paper towel tube, a piece of cardstock, and tape. This wasn’t hard to solve for my daughter (8), but it was fun to find and figure out and would be perfect for younger children.

The second clue I made was a code to decipher. The answer was “eleven” which wasn’t needed to unlock the lock. I crumpled the chart and hid that in one part of the room and hid the code in a different spot in the room. They needed to find them and figure out that they go together. 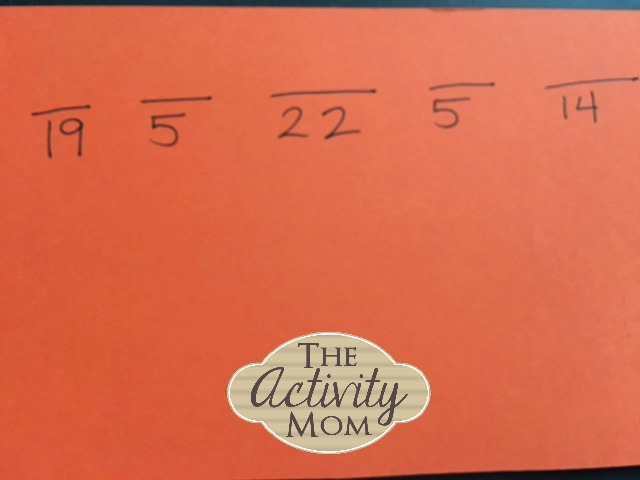 I was thinking B (11 years old), who has seen codes like this before would automatically know that it goes with the order of the alphabet, but they ended up pairing it with the chart from the previous clue to figure it out. 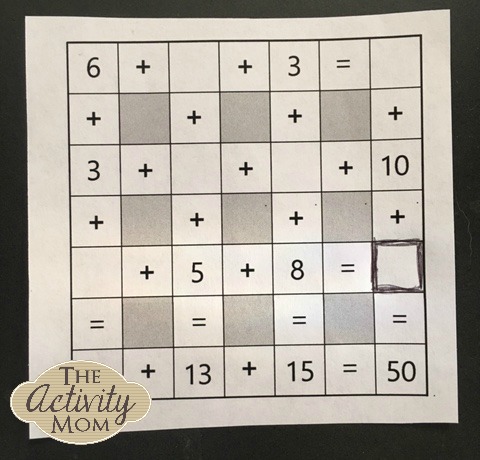 Another clue I used was a Math Puzzle from Learn with Math Games. There are many options that you can print.

I printed one that I knew would be a challenge, but not too frustrating. I boxed in the number that is the clue. This clue was also a double digit number that wasn’t needed. 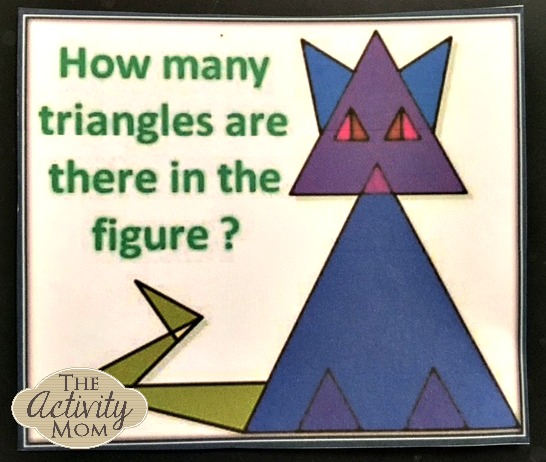 This puzzle was an easy clue to print out. I rolled it up and hid it in a plant. The answer is 16 so it also wasn’t needed for the combination. It was a fun addition to the clues. 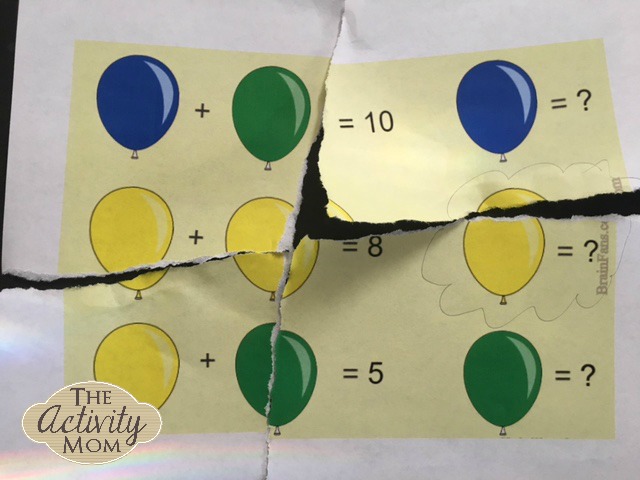 This brainteaser is from Brain Fans. They have many options that you can print out.

I circled the yellow balloon so the kids would know which number they needed for the lock combination. I ripped the paper into pieces and hid the pieces separately around the room. 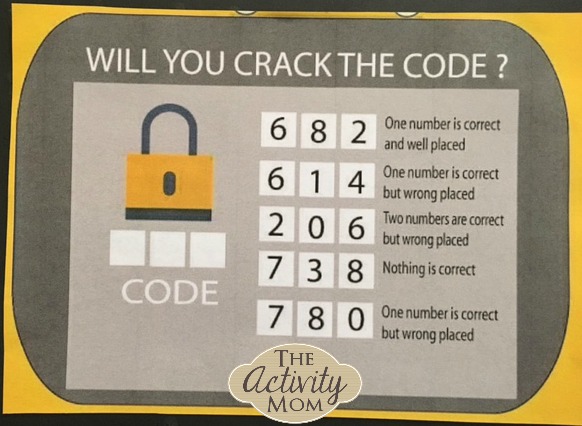 This logic puzzle game from Shake the Brain was hidden with my 11 year old in mind. He knew when he found it that it wasn’t going to be helpful, but enjoyed solving it anyway. 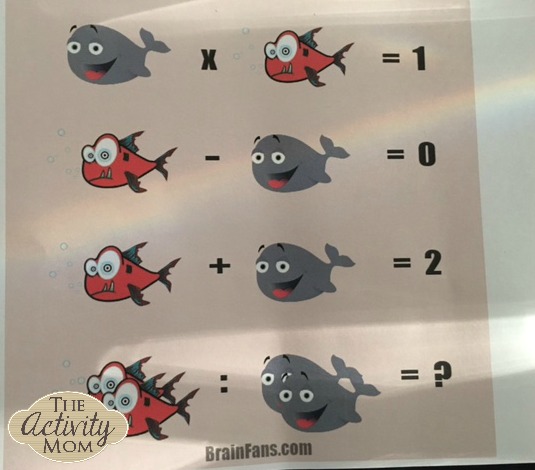 I printed this clue from Brain Fans and they have a ton of different puzzles that you can print out. The answers are given for each of the puzzles they have. 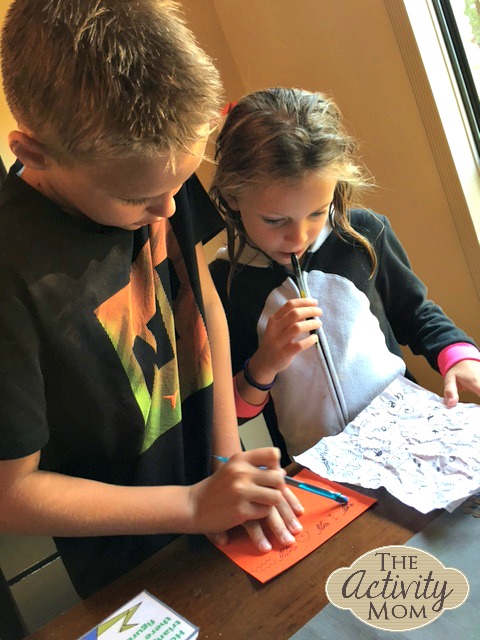 It was neat to see the kids working together and figuring out the clues. Once they figured out all of the clues, they pulled out the single digits and tried a few combinations on the lock. N (age 8) actually put together the 2 digit numbers to make a code, which was something I didn’t think of. 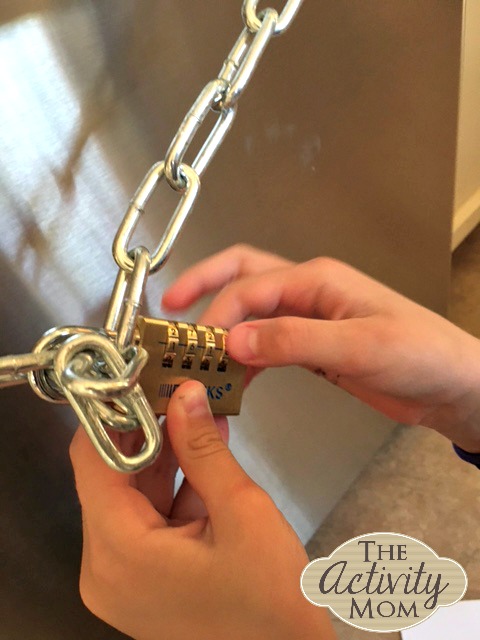 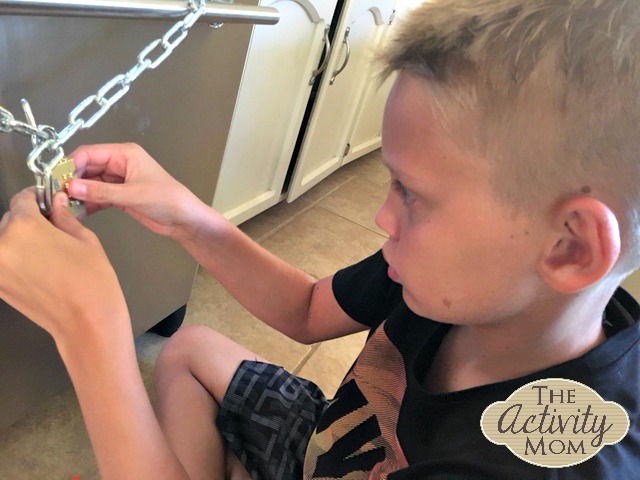 They finally unlocked it and we had dessert. What I learned is it’s actually pretty easy to make a great escape room for kids. Printing or making different clues and then hiding them didn’t take long and it was easy to set the lock to the code I needed. Don’t hesitate to give your kids more clues or a correct answer if needed.

There’s no wrong way to do it. There are different ways to make and hide the clues. You can make the clues as easy or as hard as you need to for different aged kids. We had a great time. It was a fun time for the whole family. 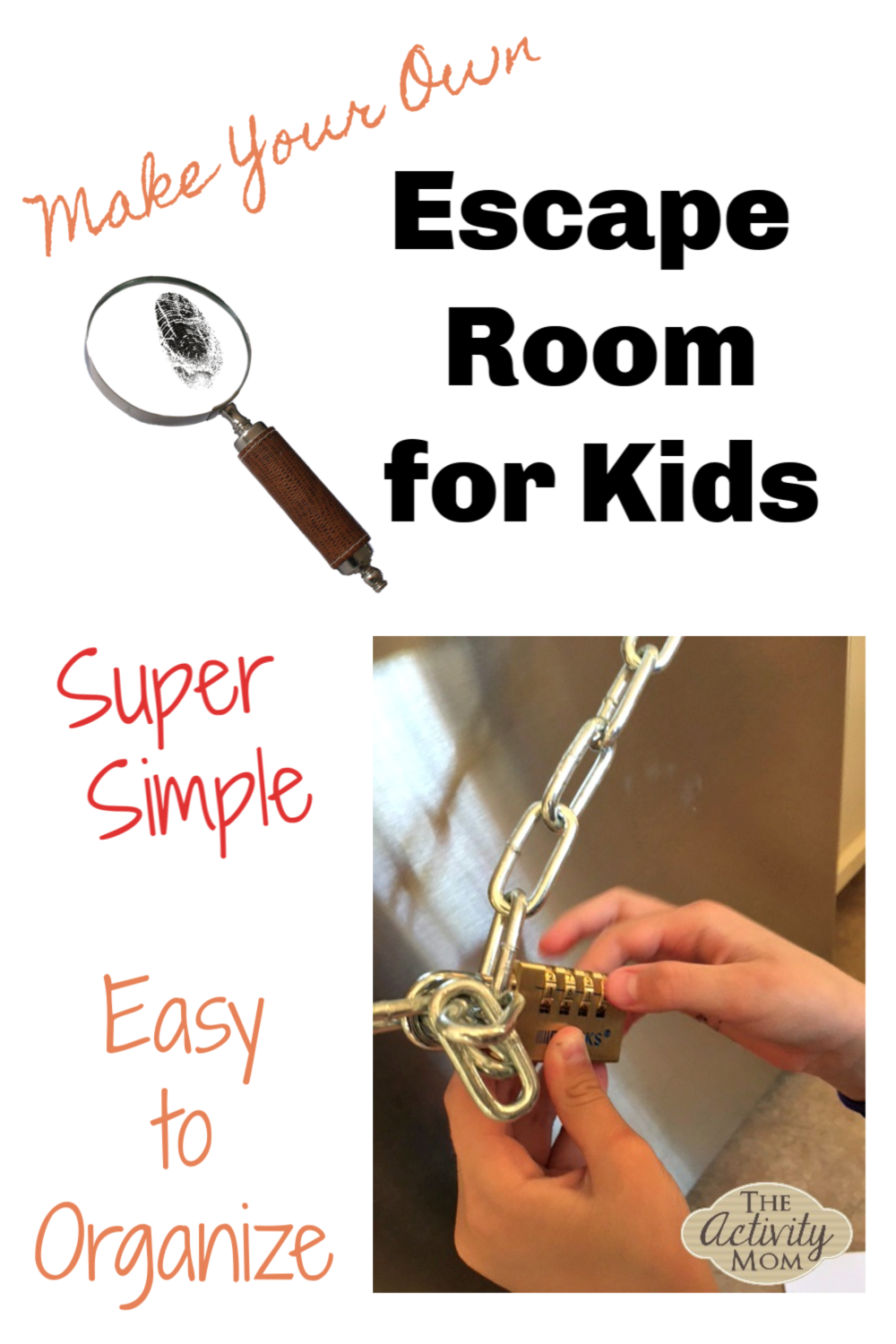 We hope our escape room ideas help you to have a fantastic adventure with your family.

We are so excited to be able to offer you this FREE Printable Escape Room for Kids! 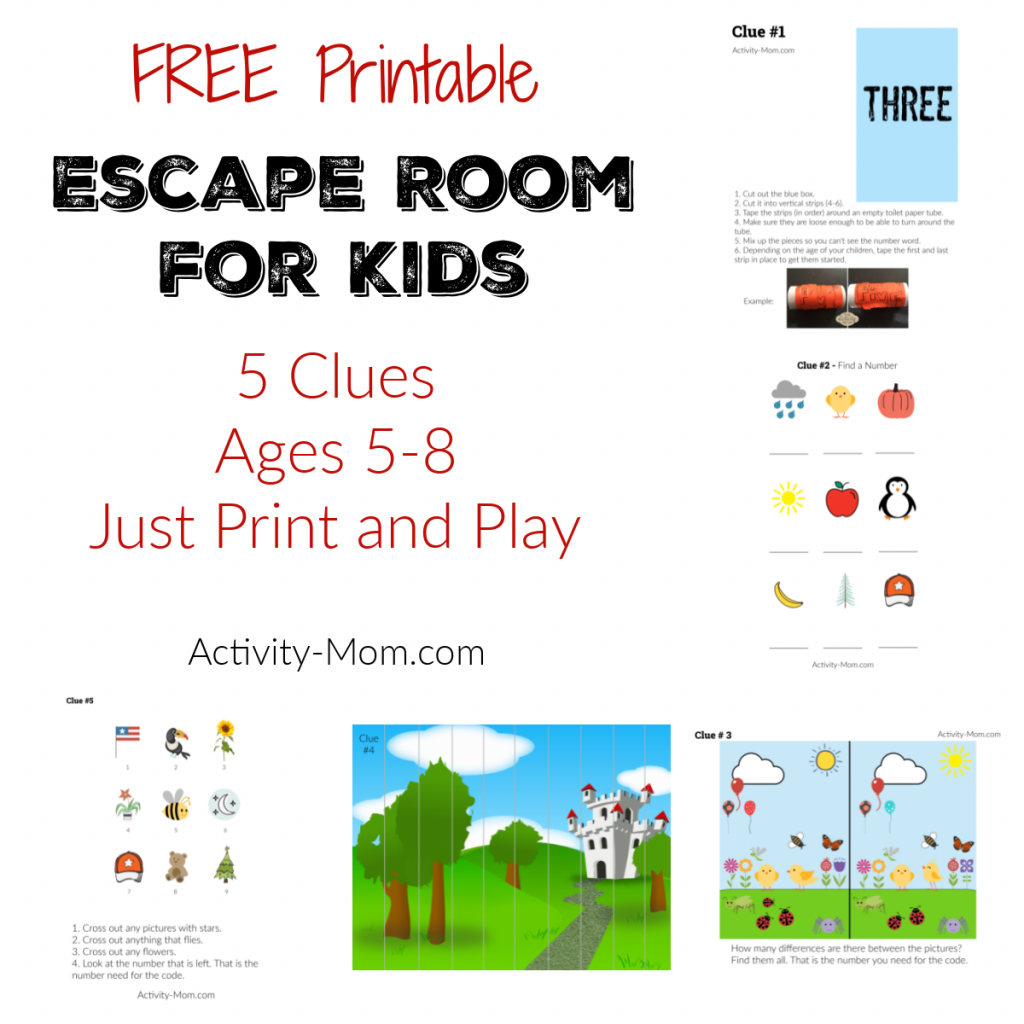 Amazing idea! You saved my life for a last minute birthday party plan this morning!!

Oh I'm so happy to hear that. I'm sure they had a blast with this escape room.

I want to be a escape room

Some great ideas here, thanks

This is so awesome! My son is always asking me to make one an to be honest I had no idea where to start! This makes it much easier!:Thanks so much for this very creative idea! This rocks!

Yay! I'm so happy you were able to use it! I hope your son had fun doing it too.

Thank you! My children had a lot of fun doing this activity today. Helped make a rainy day fun!

Yay! I'm so glad they enjoyed it!