One of the great debates from young children through adults is which one is better, your favorite book or the movie version? This book vs movie worksheet pack is a great way to compare important characters, story lines, and important scenes. It is a great opportunity for an in depth discussion or even a debate.

These no prep resources include a chart and a graphic organizer (a venn diagram). Students can use them independently or in a small group to compare and contrast the main content of the book vs the film version.

Questions to Ask about the Book vs Movie 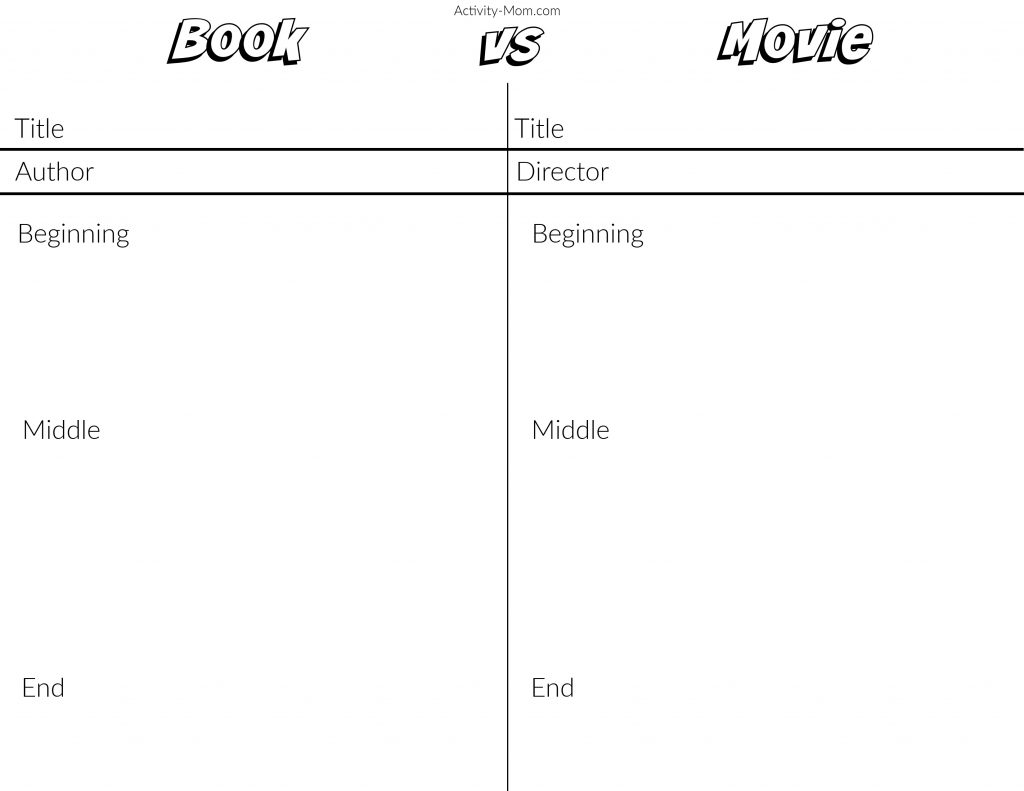 The Wonder book is a popular choice to be read by teachers and students across the country to spread the message of acceptance and kindness. Use the book vs movie worksheets to compare the two versions and vote to see which one is liked better. You can use these extra Wonder Lesson Plans to extend student learning.

Charlie and The Chocolate Factory

How does Charlie and the Chocolate Factory by Roald Dahl differ from the movie? There are a few different movies to choose from to compare to the book. I recommend watching the movie you choose before you play it for your class of 3rd graders on up.

Many children have seen the movie Holes, but have not read the book. Louis Sachar is the brilliant author of this book and he also wrote the Wayside series. This is a popular book and movie for fourth graders and fifth graders.

There are many versions of Pinnocchio the movie to compare the book or story to. Go on an adventure with the puppet that comes to life.

Follow Sophie and the Big Friendly Giant to convince the Queen to help them get rid of the other mean giants once and for all.

A fascinating story about a young girl who uses her powers to deal with her family and her kind teacher.

The Lion, the Witch, and the Wardrobe

The queen sets out to destroy Lucy and her siblings in this book by C.S. Lewis. That is the main focus of the story although there are other problems along the way that the children face.

A very popular series of books turned into movies that have been enjoyed by many!

There is an animated film produced by Disney of 101 Dalmations. Then in 1996 a realistic movie was released. Cruella is another movie that is a prequel to 101 Dalmations, but it has very little to do with the original book and story.

The Wizard of Oz

There are 17 versions of the Wizard of Oz since the first story in 1900.

There are three films to choose from to compare to this beloved book.

Since the novel was published in 1968, there have been so many versions of Little Women created. Check out Oprah’s List of all of the Little Women adaptations created.

There are four different movies made of The Jungle Book. There are many differences between the book and the movie.

Call of the Wild

The Call of the Wild by Jack London is an adventurous story about a dog that was taken from his home.

There are animated and real life versions of Charlotte’s Web to choose from. Follow the adventures of Wilbur and his friend Charlotte.

Diary of a Wimpy Kid

A popular chapter book series turned into movies. These movies are rated PG.

Harriet the Spy was written by Louise Fitzhugh and published in 1964. It was turned into a movie in 1996.

How to Train Your Dragon

How to Train Your Dragon is a series of 12 books. There are 3 films that go with these books.

Mr. Popper (played by Jim Carrey in the movie) is a story about a man that gets a final gift from his father, a penguin!

There are four original Pippi Longstocking movies that follow this adorable girl through her adventures.

A popular story and movie at Christmas time that kids of all ages enjoy.

The Littles go to the orphanage to adopt a new member of their family and decide on Stuart who is a mouse.

Whether you are a teacher that is leading your class through a book study and comparing it to a movie or a family that has a movie night of a book they just read, these book vs movie worksheets are sure to get the thinking and discussion started.