Skip to Content
Muffin Tin Monday – Apples
This week’s theme is Apples and I decided to focus on putting them in order by size.
First, B put these apple pictures in order from largest to smallest.

When I got out the real apple pieces to sort, B refused to do it so I ended up doing it myself, pretending that it was the coolest thing I’ve done all day. He still didn’t join in. “I just want to eat them.”, he told me. 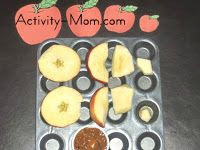 This is the first time we have cut the apple to see the star (B wasn’t that interested in that either) and also the first time I’ve offered this caramel dip (B refused to try that too). So basically I had a really yummy Muffin Tin Monday by myself. =) Oh well, can’t win them all!

APPLE TREE
Way up high in the apple tree (stretch arm up high)
Two red apples smiled at me (hold up 2 fingers)
I shook that tree as hard as I could (make a shaking motion)
Down came the apples, (make a downward motion)
Mmmm–were they good! (smile and rub stomach)
THE APPLE STAR
Take an apple round and red.
Don’t slice down, slice through instead.
Look inside it and you’ll see,
A special star for you and me!
Click here to cancel reply.

I can totally relate. Many times, my son just isn't in the mood for learning... or eating! I have eaten many a rejected meal by myself too... or with the help of hubby. ;)

Love the size sorting apples. We use those from that site at work all the time. I even printed some out last week to have my Goose try to size them. I think I am going to just do the big and little ones to start sorting size first. Great Tin!http://kreativekristen.blogspot.com/2009/09/muffin-tin-monday-theme-apples.html

Oh, I love the sizing with cutouts and then real apples! Great idea.

Did you change your layout or background??? I liked it much better before! :)

I hate it when they refuse to participate! It was a good lesson though!