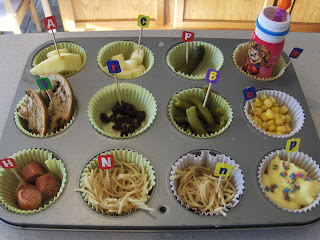 “Alphabet Soup” – A is for apples, C is for cheese, P is for pickle, M is for milkshake (yogurt), B is for bagel, R is for raisins, B is for beans, C is for corn, H is for hotdog, Nn is for noodles, and P is for pudding

B has really been into the story Alphabet Mystery. In the story, the Capital I threatens to turn the lowercase letters into alphabet soup and he thinks that is hilarious. So this week we called our Muffin Tin Monday meal, “alphabet soup”. B LOVED it! He actually sat down at the table and ate for 30 min. which is unheard of for him. He didn’t eat the veggies or the hotdog but hey let’s not get crazy! =)

At the end of the meal, the spaghetti noodles were snakes and the raisins were ants and the pickle was a crocodile and a big chase began but I didn’t mind because he was eating bites while playing.

We don't force the kids to eat anything they do not want to eat. But we also do not make additional food or offer additional food. Generally we try to keep everyone happy within limits and not get into power struggles over food. It sort of works. Some days the kids don't seem to eat much of anything, but other days they chow down.

We have the other Alphabet books by Audrey Wood; my 3-year-old would probably love this one as well.

We have the 3-bite rule here, but also I sometimes suggest that we take turns feeding each other. If my 3-year-old feeds his food to me first, he's much more likely to eat.

I love the alphabet idea for your Muffin Tin Monday.

Now that my girls are older,I've become the mean mama who forces them to eat veges that they don't like. The problem is that one likes one kind of vege and the other likes the other, etc. If I'm introducing a very new food, I just have them try it. I just make sure that I'm serving other things with it that I know they will enjoy. I've learned to re-introduce foods over and over. This is how I eventually got my girls to eat Salmon. Now they love it!

I love your imagination with this and your theme too! This is awesome!!

Never heard of this book either, but will look for it at my library!