Make your own felt capes for your little ones with this easy tutorial and watch the creative play unfold! 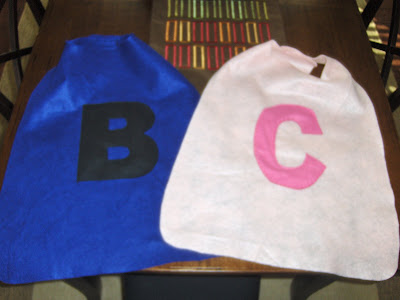 The thing I love most about B’s age (2 1/2) is how he loves to pretend! B and his friend C spend tons of time saving animals (like Diego) or running and hiding from bears. On “Dora’s Christmas” she wears a cape so I thought B would enjoy wearing one too.

I found this Make a Superhero Cape Tutorial at Puking Pastilles. Her capes are WAY cuter than mine! Her measurements and pictures are extremely helpful!

*I bought felt at Walmart. 3/4 of a yard for each cape and a little extra for letters.
*I cut out the shape of the cape (using her measurements).
*I printed out a large block letter in Word, traced it onto the felt using chalk, and cut it out.
*I pinned the letter onto the cape and sewed around the edge.
*Finally I pinned each piece of sew-on velcro to the collar area and sewed it on.

That was it! So easy! I used a zig zag stitch to sew on the letter so you couldn’t tell if there were parts where the stitch wasn’t straight. I didn’t have to sew around the cape at all because it was made from felt. B LOVES it!

Hi Pink and Green MamaYes I made these and B LOVES his. He wears it everyday! I used the tutorial for the basic measurements and shape of the cape and then sewed on the felt letter. Super easy! Good luck! =)

Adorable!! WE received a beautiful homemade purple cape like this as part of the crafty crow's stocking stuffer exchange for "C" (mini saurus) am wondering if you made it or if it came from someone else. Now "E" wants me to make her one too! : )