Skip to Content
Is your child scared of the dark or worried about monsters? This Monster Spray is for you! It worked for us. 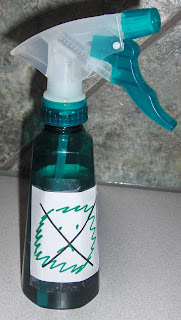 B is going through a stage where he is scared of monsters coming into his room at night. It is effecting his sleep and making our bedtime routine so much longer. It is so hard to walk out of the room at night knowing he is scared to be in there alone! I was hoping it would be a short phase that would correct itself but after seeing that it was slowly getting worse I knew I had to do something about it. I’ve seen the idea of making monster spray in many of the parenting books but I always thought it sounded so silly. In fact, I wasn’t even considering trying it until my good friend recommended it to me and told me it worked for her and everyone she knew.

I put water in a special cup while B wasn’t looking and made the labels for the spray bottle. We poured it in together, put some beads in the bottle (just a random extra touch) and talked about how monsters are scared of this spray and once we spray it they will never come back.

The first night I thought “What am I getting myself into?” because he sprayed the whole house. It took FOREVER! I also made the mistake of telling him the spray made monsters disappear so then he thought everything he sprayed would disappear and kept saying “Watch out for the spray so you don’t disappear. At that point I just focused on how the spray scares the monsters and they never come back. It was worth the big production because IT WORKED! I left the spray on his dresser as a reminder and he still talks about it. We’ve only had to spray one other time. My friend said that every now and then her boys still get scared and she uses the spray for them.

I’m SO happy this worked for us! What are some other ways that you have gotten rid of monsters in your home? B is still scared of the noises outside at night (cars on the road etc.), any ideas for this?

PS e-mail me at Carlaroni@yahoo.com if you have any questions about that dream bag

Hi! I know I am not going to remember this in great detail so bear with me, but when my oldest boy was very little (he is now 11!!) someone gave him a "dream bag." I can NOT for the life of me remember who it was or where this gift came from. It was made of felt and it had all these little objects that you were supposed to "put" into the bag at bedtime to help with good dreams. We honestly never really used it and I am not sure where it is now. I haven't thought about it in all these years until I read your post. What if you made a dream bag with your child and thought about objects that are comforting to him? a teddy bear, a favorite toy, a favorite book or blanket. When I was young, I felt that I had to wear a special necklace charm that my grandmother gave me to be "safe" at night....maybe something along those lines would help your son feel secure enough to be alone in his room to go to sleep. I wish I could remember more about that dream bag because it also had a poem. I will try to scour my attic and if I find it, I will remember to post back on your site! You are very creative, so maybe with just this brief outline of an idea you can come up with your own version. You can make a mini version of the items in felt or maybe just use the actual items as large as they are and put them in a sack or bag at the foot of his bed? I hope that helps. It is so upsetting for both the child and the parent. It is a phase and this too shall pass.......

I had to use the same technique for my son. But for him, it was aliens, not monsters. It worked for him as well. He hasn't even mentioned the aliens since.

My son had the same issue with being scared and I formed a whole company out of it. Fairytale Wishes, Inc. Each one of our all natural aromatherapy sprays has a little magic glitter and a mini fairytale written by Freddy, the magic Fairtyale Wishes frog. Our Monster Repellent smells like Bubblegum and works like a charm. In case you didn't know monsters are terrified of the smell of bubblegum. It makes sense right? It gets in their fur and tentacles and is so sticky so they can't scare you. So just the mere smell of it keeps them far far away. Check it out www.fairytalewishesinc.com Good luck!

I have never heard of monster spray- definitely going to remember this post! That's awesome that it worked. I remember being scared of monsters when I was little... wish my mom would have known about this :)