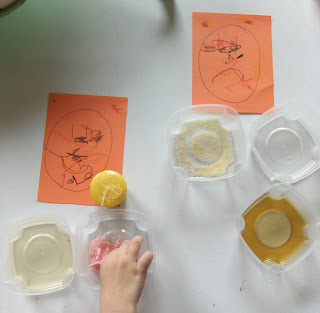 I realized the other day that when B was smelling flowers he was breathing out through his nose instead of in so he wasn’t really smelling. I put several items in containers and had B smell them to see if they smelled good (and put them by the happy face) or smelled bad (and put them by the sad face). The items I used were juice, a lemon candle, frosting, vinegar, garlic salt, and sesame oil. Finally, by the end of the sort he was breathing in to smell, but this will be an activity that we will keep working on!
Click here to cancel reply.

Wonderful idea. I like how you had the faces laid out for him to put the ones he liked on or the ones he didn't like on.

what a great idea. Not only did you teach him to breathe in to smell but I bet he had fun too.