Skip to Content
B has been really interested in reading lately so I saw this sight word game idea at  The Every Day Home School and gave it a try. 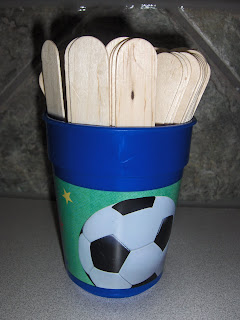 I wrote words that B knew how to read and a few that he may not know but could sound out on craft sticks. I wrote words in red that couldn’t be sounded out or “special words” as we have been calling them lately. I also wrote 3 Shrek Characters’ names on sticks.

Here’s how to play: Draw a stick and read the word. If you read the word, you keep the stick. If you don’t, you put it back or give it to the other person. If you draw a special stick (for us it was the Shrek characters) you get to keep it and get another turn. The person at the end of the game with the most sticks wins.
We didn’t really have a winner. Instead we played and helped each other. At first I had the Shrek words as “lose a turn” sticks, but B kept trying to pick them and was so excited to draw one that I made it an “extra turn” stick instead. Really this game can be adapted to any rules or concept that you want to work on (colors, shapes, letters, numbers, etc.).
Click here to cancel reply.

Like this one!! We will have to try this pronto! This might be right up my little guy's alley.

Like it! Just made our sticks - we will play tommorrow!!!

What a fun idea! I will be storing this one for the future. We are just starting to get into reading some words here so I will wait until we have a few more in our repertoire for this game :-)

Great idea! Ahh craft sticks have so many great uses!