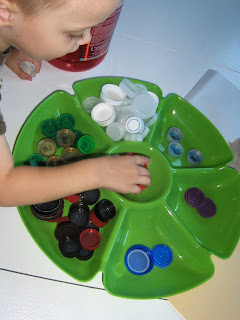 Once your child becomes an “expert sorter”, challenge them by giving them a group of objects and asking them to sort them without specifying by what characteristic.
For example, B wanted to sort these bottle tops. I didn’t specify how he could sort them and it was so interesting to see what he came up with. He could have sorted by size and instead he sorted by color (with the exception of a few that he had good reason for including with a different color).
In the example above I only gave him all bottle tops to sort but you could give a sample of random objects and see how they decide sort them. (Maybe you’ll end up with Things I Like/Things I Don’t Like, Things that Work/Don’t Work, or Things that Roll/Things that Don’t Roll) After they have sorted one way ask, “Can you think of another way to sort them?”. I asked B that question and he replied “No!” and moved away from the table.
Click here to cancel reply.

My 3 Year old will love this...She is the sort queen:) Thanks for sharing!