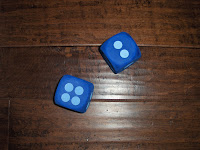 I finally found a huge pair of dice at Dollar Tree that we can use to play so many of our games. There’s just something about the big dice that makes it so much more fun.

What We Played:
Each player rolls a die. Whoever rolls a bigger number wins (or gets a point). We’d each say the number we rolled and I’d ask “Whose is bigger?”. Then we’d high five and do it again.

A Dice Game for Older Children:

Check out this Spin to Win post that has games to play with a spinner that could also be played with dice.

This is fabulous! Can you link it to math links? Thanks!!

Just stopping by to let you know that each Friday we'll hold weekly linky under the name "HIGH PAW - show us your best!" and anything toddlers related is welcome! :)

You can add your ideas to last weeks linky here: http://best-toys-for-toddler.blogspot.com/2011/01/high-paw-show-us-your-best.html

we love are big dice .. we use them for movement games . counting games , listening game ..