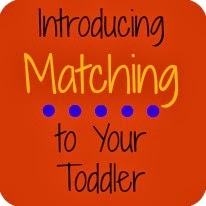 As adults, we sometimes take simple concepts for granted.  That is, until we try to explain or teach them to someone else!  Some things come so naturally now, that it is easy to forget that we haven’t always known how to do them.  This was a lesson I encountered over and over as a teacher, and now face often as a mother of a toddler as well!

One of these moments for me was attempting to introduce the concept of matching to my daughter.  After trying to think through baby steps of how to introduce this idea, here is the activity I came up with for my daughter.  (As a frame of reference, Sophie was 16 months old when I tried this activity with her, but you know your child and whether he or she might be ready before or after that!) 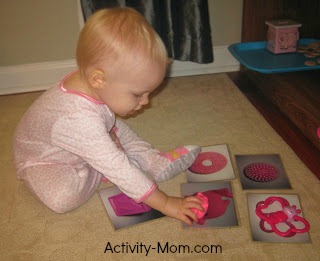 I started by gathering a five small toys and snapping a picture with my camera.  I printed the pictures and laminated them (primarily because I’m addicted to laminating things, but also because I wanted to be able to reuse them!).  The particular toys we used were all pink because I was doing a pink theme that week with our activities.

Next, I showed Sophie the pictures and made sure that she was familiar with the names of the items.  “Oh look, this is your pink ball.” You get the idea.

Then I moved to laying them all out in front of her and asking her to find particular items.  “Sophie, where is dolphin?”

Finally, I moved to the matching stage.  I laid out the pictures and put all the small toys in a pile.  She would pick up a toy and I would ask if she could find the picture of that particular item.  When she did, I would show her how she could put it on top of the picture.

It didn’t take too long for her to get the idea, and soon this became a favorite game.  I love it because it is so easy to modify for any theme or special holiday.  I am already planning on doing a version with some of her Christmas ornaments in the coming weeks!

This is a great idea thank you for sharing.

I just started working with my son (2 1/2) on matching colours. It has taken a few attempts, but he seems to have finally clicked on what matching means. I like this idea of using toys they are familiar with.