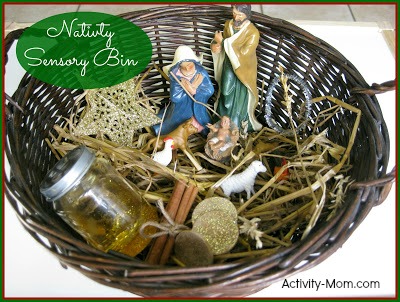 I want my daughter to have as many chances as possible to explore the Christmas story this year.  She loves playing with her Little People Nativity Set as well as a magnetic refrigerator Nativity set I found for her.  Another way I can share the story with her is through a Nativity sensory bin!

I used straw as my base for the basket – I was able to find a friend who was tossing out some fall decor who was more than willing to share for a good cause.

Mary, Joseph, and Baby Jesus are replacement Nativity pieces I found at Walmart that could be purchased separately (umm…brilliant idea, someone!).  If you have a personal Nativity set that is safe for little hands, you could always include those pieces instead of getting separate ones.  I’ve also seen some on Pinterest made out of wooden pieces from the craft store. 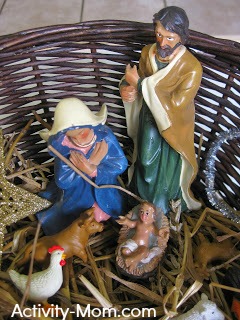 The star was a glitter ornament I found at the Dollar Tree, but you could easily make your own with foam, a wood shape, or even glittery scrapbook paper.  The angel halo was just a silver pipe cleaner we had laying around our Tot School supplies.  You could also use a piece of tinsel or garland from your decorations

To represent the Shepherds, I added the sheep (as well as other animals) from our Farm Animals.  I tried to brainstorm a good shepherd’s staff, but it just never came to me.  The Wise Men were represented by three gifts, “gold” coins (wooden nickels painted glittery gold), spices (cinnamon sticks), and oil (baby oil with some food coloring and glitter in an old baby food jar – lid super glued on!).  You could also include a crown or jewels. 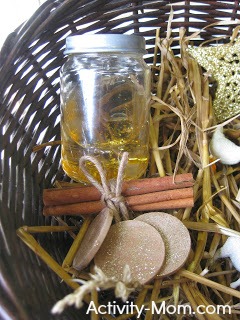 I plan to pull this sensory bin out as one of our Advent activities in the coming week or so, and I really look forward to telling the story as Sophie explores it hands-on!

I did something similar a couple years ago. It wasn't a perfect fit, but I used candy canes for the shepherd's staff.

What a nice sensory bin! It looks so lovely.