Skip to Content
I found these Movement Cards at The Home Teacher and love them! There are 3 different sets you can choose from to print out. I chose this set because I liked that it had one movement for each letter of the alphabet, the pictures really went with each movement (so hopefully one day B can play it on his own), and I could picture myself doing most of the movements with B. 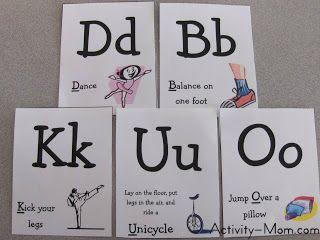 How to Play: Print and cut out the cards. Put the cards into the bucket and take turns drawing a card out and doing that movement. (We don’t have a winner at our house but we do keep the cards that we pick in our own piles which is a big deal.)
Confession: I must confess that when I printed these I pictured myself bringing them out during that time of day when B is totally bouncing off the wall (oooh around 4:00). I thought the structure of the game would help me keep my sanity and the movements would still allow him to use his energy. It didn’t go as planned. =) I would suggest playing the game during a time of day that your child can focus on the movements and the actual game. Then, during that crazy time of day, maybe he/she can play it by themselves and then 500 leg kicks won’t bother you as much. =)
Here are the three different sets of Movement Cards that I found at The Home Teacher:
Set One
Set Two
Set Three

thank you for sharing! I seriously was going to create some thing like this this weekend--but I found these!! Woo-hoo!You made my Saturday! Thanks for sharing the links!!

These look really fun. I think my son--the preschooler at home while the 1st grader is homeschooling--would love a special activity of his own!

Those look like so much fun! Thanks for sharing the links!

These look cute...thanks for sharing!

Thanks for the comment on my post...I am going to try to post some of the different activities I do with Juliette. It is harder to get pictures of some of them but it will be a good way to remember all the fun you can have with a baby!!