This ABC Board is an easy DIY for teaching and working with letter sounds. 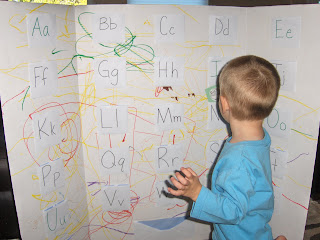 When B was younger we would lay this tri-fold project board on the floor and let him do his coloring and crafts on it. This would protect the floor and sometimes he had fun coloring directly on it.
Now that he is older, I wanted to find a different use for the board. So I made it into an ABC board for matching letter sounds. I sealed 13 envelopes and cut them in half (actually a little less than half so they would all fit on the board). I wrote the letters on each one and taped them on the board. 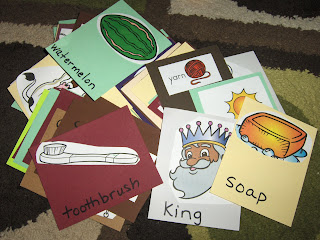 Then I cut apart a beginning letter sounds workbook we had and put the pictures on scrap cardstock (I cut the cardstock into 3 1/2 x 4 1/2 pieces so they would fit easily into the envelope but still stick out from the top so they were easy to see).

When I introduced the game, I asked B what the picture was. After he said the word, I would say “What letter does king start with? K-k-k king”. He would say the letter, find it on the board, and put the card in.

B thinks this game is so cool! He was so excited about his “BIG ABC book”. This also has turned into a great vocabulary lesson. I realized he wasn’t sure what all of the pictures were when he called a picture of a piano a xylophone.

I didn’t spend a lot of time on creating it and I used scotch tape to put the envelopes on the board so I’m not sure how long it will hold up. There are also WAY too many picture cards. I should have started with just a few.

If you want to give this activity a try but need the pictures, click HERE to print a great set of letter sound cards.

Thank you so much! Just printed out the pictures for my 4 year old and will be putting this together soon. Thanks for sharing!

Great idea!!! I love the idea of using sealed envelopes for the pockets!!! I have tons of them from way back when I got married and saved them because I knew someday I'd be able to use them - thanks for showing me how! :)

This comment has been removed by a blog administrator.

Awesome idea! And so much fun!

Great idea! We do something similar with letters that we cut out of a magazine and he has to tape them to the letter on the board. Please check out my post today. I wrote about your Pay it Forward. Thanks again for my cards and the fishing game!