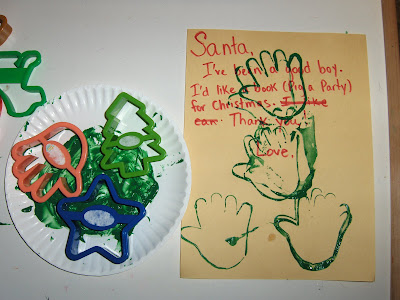 I wrote the letter to Santa for B as he told me what he wanted to say. He really only wants the book “If You Give a Pig a Party” that he looked at while shopping at Kohls the other day. I asked him what else he would like to ask Santa for and he said “I already got a candy cane from him the other day.” (when we went to visit him at Bass Pro Shop). When he kept insisting that he wanted that book I ran out and got it. I was afraid it would be gone and I felt a sense of panic that he wouldn’t get the one thing he was asking for. What am I going to do as the requests get bigger???

After we wrote the letter, B used cookie cutters and paint to stamp the paper to make it special. I saw this idea yesterday on April Flowers. I still can’t believe he picked the handprint shape over the Christmas tree!

Later today he will sign his name and put it in the mail.

That's so sweet that he is such a little bookworm! I know what you mean about the requests getting bigger, I'm dreading the day when my little one asks me for a cell phone or an iPod or something. Thanks for linking to me:)