Skip to Content
Do you have one of these ABC mats at your house? Besides using the pieces as a puzzle, you can also have an ABC Hunt. After you try the ABC Hunt, here are several other ways you can use this alphabet mat. 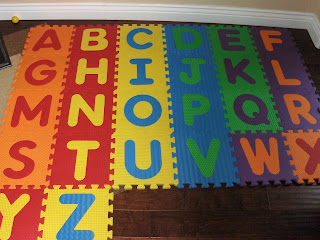 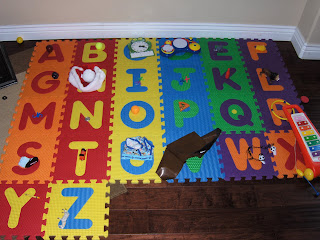 We searched the house for things that started with each letter. I had two rules with this hunt. 1) Only one object on each letter and 2) After we were done and showed Dad, it had to be picked up.
It was so fun! Without the play food and animals it would have been hard to fill up.
Other ideas with this ABC Mat:
Use a play hammer to pound in the letters
Match magnetic letters to the letters on the mat
Match lowercase letters to the letters on the mat
Spell words with the letter pieces
Find books that begin with each letter
Jump from letter to letter to spell your name
Jump from letter to letter to spell CVC words
Jump to a letter that makes the sound ___.
Race to see how fast you can put the puzzle back together
Click here to cancel reply.

I have a mini one...each square is about 3x3--so it isn't quite as overwhelming :)

I really like the idea you have about collecting items from around the house and putting them on the block. Awesome! Thanks for sharing,Ally

What GREAT ideas, thanks so much for sharing!!From Alissa@ Excuse Me Mrs.C!

Stacie,Yes, just tried mine to make sure. They do fit together well, but when you roll them the letters fall out.

Great idea! I'll have to look for some of those in my garage sale adventures. Are they sturdy enough to make some squares and roll like dice?

We don't have a mat like this, but it's a really cute idea!