Skip to Content
Yesterday I shared a Number Tower activity with the same styrofoam cups. We put the numbered cups to use again with this “Guess the Number” Game. So simple and so fun! 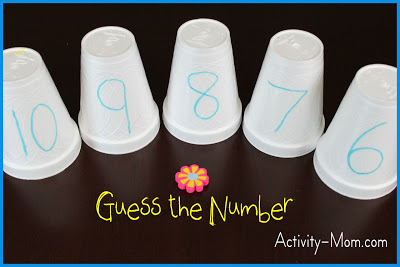 Get a small object (we used a flower eraser) and five cups. I decided to use cups 6-10 because those are harder for N to identify.
How to Play:
Player 1: Hide the flower eraser under a cup.
Player 2: Guess the number, but do NOT touch the cups. For example, “Is it under number 9?” “Is it under number 5?”.
Player 1: Lifts the cups as player 2 guesses.
Tip:
It is so important for the guesser to only ask about the numbers instead of lifting the cups up as he guesses! If it is played the right way then both players are getting practice identifying numbers. If the guesser lifts up the cups at the same time as he guesses, then the focus of learning numbers is lost.
Click here to cancel reply.

My kids love guessing games! What a great idea to learn number sense!

What a great game!! I'd love it if you'd share this at the After School Linky party up on my blog right now: deceptivelyeducational.blogspot.com

So awesome for number recognition and so simple! Love it!