Busy boxes (similar to busy bags) are still one of G’s favorite things! In fact, he chooses to do a busy box more often than just playing with toys! Plus, they’re the perfect way to encourage some one-on-one play time with my little guy! Here are the March Busy Boxes we introduced this month and the new things we included:

Okay, this one was thrown together so fast but has turned out to be his VERY favorite! Sometimes our most successful busy boxes are the ones we spend very little time on. I filled an empty diaper wipes container with a handful of jungle animal-themed beads. He has to push the animal through the opening (lid closed) and then open the lid to pour the beads out again. It’s great for fine motor skills and he LOVES inspecting the tiny animals! You can find animal beads at the craft store. Add a few pipe cleaners for threading the beads.

As he gets older, we’ll continue to add harder objects, but for now, this is a simple open and close busy box. All of the lids on these containers POP open (no need to screw or unscrew). He loves to open and close them and sometimes shoves different things like tiny animals or magnetic letters inside. Add lima beans and it becomes a sensory bin.

He LOVES his Mess-Free Crayola fingerpaint (affiliate link). I, however, do not. Ha! It’s a FAST activity and while it doesn’t leave a COLORFUL mess, it does leave a bit of a sticky mess. Still, it’s a great sensory play activity!

Stickers are an easy boredom buster for younger children and older children too. G has his own sticker box, which he loves. His is different than his big sister’s because I’ve removed ALL the backings on his stickers. This makes it much easier for him to just peel the sticker off.

He always has so much fun digging through, naming the stickers (great for language development), and of course, plastering his arms and legs with them! I also included a small notebook that he can put the stickers in. 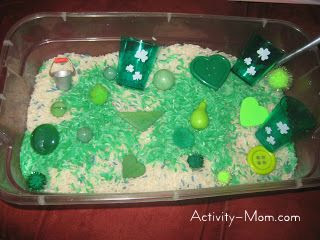 And finally, a St. Patrick’s themed sensory tub for the little guy (and his older sibling, who enjoys it just as much as him!). I just found green objects around the house (buttons, pom poms, erasers) and mixed them in with green and white rice. The green plastic shot glasses are from the dollar store. He LOVES his sensory box and it provides hours of independent play. For easy clean up, put a vinyl shower curtain underneath it on the floor or table. Then, when you child is done, fold it up and shake it out outside.

Check out how we made our original Toddler Busy Box.

Check out our other busy boxes:

Have you made any of your own busy boxes yet?  Do you have a friend who is getting ready to have a new baby in addition to her toddler? A set of these busy box activities would be a great gift and provide hours of entertainment.
Click here to cancel reply.

Omg i love all of these ideas! I love that you took the backing off the stickers; peeling stickers is always so difficult for my boy. I'm going to try all of these. He's going to love opening and closing the small container lids. Thanks for sharing!

Omg i love all of these ideas! I love that you took the backing off the stickers; peeling stickers is always so difficult for my boy. I'm going to try all of these. He's going to love opening and closing the small container lids. Thanks for sharing!